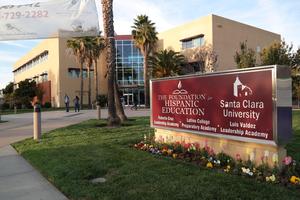 For those students that are interested in acting, LCPA hosts and perform annual musical theatre events where students have the opportunity to be a part of an ensemble! Here is a testimonial from one of our LCPA Class of 2020 Seniors!

Janet Valenzuela is a magnificent senior at Latino College Preparatory Academy (LCPA) who aspires to pursue a major in Film and Television after she graduates high school. Janet's senior year consisted of getting out of her comfort zone and being a part of LCPA's annual musical theatre event. Being a part of an ensemble has allowed Janet to perceive the roles of an actor and dancer, which only motivates her to pursue a career in Film and Television in college. Janet's confidence in performing in front of others began when she joined LCPA's Girls Varsity Basketball team during her Freshman year of high school. Playing against the opposing team as well as playing in front of their fan base has allowed Janet to develop confidence in not worrying about the negative opinions of others. Also, Janet volunteers at her local church as an Altar server, where she assists the presider during Spanish Catholic liturgies. Involving herself at church helped in Janet's leadership development, which she implements in her education in favor of her success and the success of her peers as well.

Living on the East Side of San Jose, Janet, and her family were aware of how close their home was located to LCPA. By merely viewing the look of the campus, excited Janet, even more, coming into high school as a Freshman. Janet has had an enjoyable experience thus far at LCPA due to the secure connection that she was with all of her teachers and faculty. Janet is not afraid of failure and hardships because she knows that she can easily rely on her teachers to lend a hand. Considering that all schools in The Foundation for Hispanic Education allow teachers to devote a sufficient amount of attention to students, has helped Janet overcome educational barriers that she has dealt with throughout high school. The aspect of feeling accepted by all of her peers and teachers has ensured Janet's academic and personal success.

Once Janet graduates from LCPA, she plans on coming back in the future to contribute to LCPA's annual musical theatre events as well as coordinating and directing a play for future students that also share the same vision as her. She says that nothing would be more rewarding than encouraging students to come out of their comfort zone and be a part of something nourishing.